Everything about Urquharts that our clients seek and trust – our expertise, experience and quality of service – is based on the firm foundations provided by our long history.

Ever since our founder Andrew Urquhart moved from Aberdeen down to Edinburgh in 1873, and then in 1876 set up an office in the New Town, the company’s approach has been based on a continuity of service to a long and distinguished list of private individuals and businesses. This has allowed the firm to weather recessions and grow during periods of prosperity, all the time staying true to its core set of values.

Andrew Urquhart SSC, the founder of the firm, serves his apprenticeship with the well-known Aberdeen law firm Edmonds Macqueen (now Ledingham Chalmers). He read law at Aberdeen University having decided not to follow in his father’s footsteps who was a Shipmaster and had captained Tea Clippers to China from North East Scotland.

Andrew comes down to Edinburgh to continue his career in law. He carries a letter of recommendation from Edmonds Macqueen that declares that “…he has been uniformly well conducted, attentive and obliging…”

Andrew sets up business on his own in Edinburgh’s New Town and becomes a solicitor in the city’s Supreme Court. It is thought that he first operated out of Thistle Street, then Pitt Street (since renamed Dundas Street). At this time, Andrew was routinely handling Edmonds Macqueen’s court work in the Court of Session.

Over the next 30 years he grew his client base, expertise and renown.

Andrew’s Son, William Macduff Urquhart joins the firm and is assumed as a partner, and became a Solicitor in the Supreme Court (SSC). The firm becomes known as A & W.M. Urquhart. Andrew Urquhart retires in 1916.

William Macduff Urquhart assumes Lawrence J Miller as a partner. Partly as a result of the friendship between Andrew Urquhart and a young Scottish architect James Miller, the firm begins its residential property work and its long association with Miller Homes who build extensively throughout Edinburgh.

The Firm grows incrementally in the years that follow to assume the size it is today.

The third generation of the family, Ronald Macduff Urquhart WS, joins the firm.

Roderick Macduff Urquhart WS joins the firm – the great grandson of the founder Andrew Urquhart and the fourth generation to do so. James Baird WS also joins the firm in 1982.

Alastair Thornton, is elected President of The Law Society of Scotland. In 2004 he is appointed a sheriff and retires as a partner.

Stephen Blane joins the firm as a Solicitor Advocate and partner.

Gillian Black is appointed a partner.

The Firm decides to carry out its business using the name Urquharts.

The Firm still has only four partners, and associated staff, having for some time taken a conscious decision to remain a purposely small law firm, offering a high standard of personal service and expertise.

Sara Smith joins the firm as a partner, from Shoosmiths, Solicitors in Edinburgh. She brings with her many former clients of Archibald Campbell & Harley, which had previously merged with Shoosmiths in October 2012.  Urquharts is very pleased to welcome these new clients to the Firm.

Alison Grandison joins the firm as a partner from Simpson & Marwick, specialising in residential property and conveyancing.

Roderick Urquhart retires as a partner of the firm after almost 40 years at 16 Heriot Row. 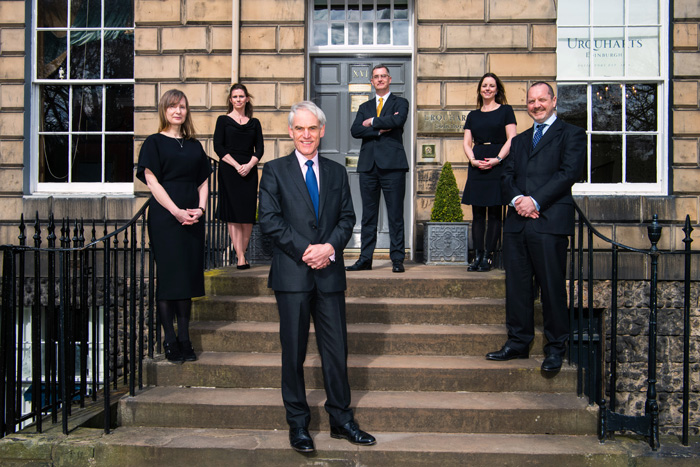